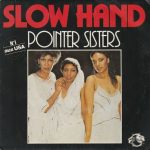 “Slow Hand” is a song recorded by American vocal group The Pointer Sisters for their eighth studio album Black & White (1981). The song, written by Michael Clark and John Bettis, was released by the Planet label on May 1981 as the lead single from Black & White.

Black & White is the eighth studio album by the Pointer Sisters, released in 1981 on the Planet label. Black & White was their fourth record with producer Richard Perry and yielded the #2 pop hit “Slow Hand”. The fourth single release, “Should I Do It”, reached #13 in the spring of 1982, making Black […]