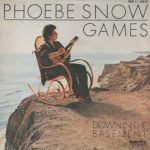 “Games” is a song by Phoebe Snow from her album Rock Away, released in 1981. It peakes at #46 in the US Billboard Charts.