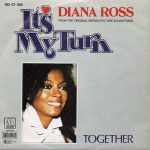 “It’s My Turn” is a 1980 song used as the theme to the film of the same name. The song, written by Carole Bayer Sager (lyrics) and Michael Masser (music) for Diana Ross, was released as a single on September 29, 1980 and became a top ten hit on the Billboard Hot 100, peaking at number nine, and at number 14 on the soul chart. “It’s My Turn”, likewise, peaked at number nine on the Adult Contemporary chart. The song was used as the theme song of Philippine drama anthology Coney Reyes on Camera in 1984.

“To Love Again” is a 1981 studio/compilation album by Diana Ross. It featured both new recordings and previously-released material. The album was produced by Michael Masser. It reached number 32 in the USA (#16 R&B) and sold around 200,000 copies. Tracks 1  It’s My Turn (Michael Masser; Carole Bayer Sager) 03:56 2  Stay With Me […]