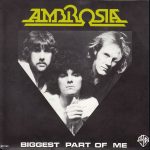 “Biggest Part of Me” is a song by American band Ambrosia, from the album One Eighty. Released as a single in 1980, the song reached number 1 on the Radio and Records chart and number 3 on both the US Billboard Hot 100 and Adult Contemporary charts. The song was written by band member David Pack. Pack re-recorded the song on his 2005 album, The Secret of Movin’ On.

One Eighty is the fourth album by the band Ambrosia. Ambrosia is an American rock band formed in southern California in 1970. Ambrosia had five Top 40 hit singles released between 1975 and 1980, including the Top 5 hits “How Much I Feel” and “Biggest Part of Me”, and top 20 hits “You’re the Only […]