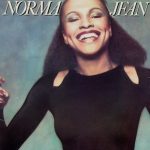 Norma Jean is the debut, and only, solo studio album by American R&B singer Norma Jean Wright, released on Bearsville Records in 1978. The album was produced by Bernard Edwards and Nile Rodgers of the band Chic, and was the project directly following the band’s successful self-titled debut album Chic, which featured Wright on vocals.

The album was reissued on CD with five bonus tracks by Sequel Records in 2000. The CD was soon out of print and commanded high prices on the collectors’ market until reissued again in 2011 with the 7″ versions of “Sorcerer” and “Having a Party” added.