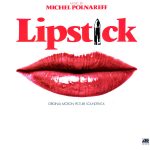 Lipstick is a 1976 American rape and revenge thriller film directed by Lamont Johnson and starring Margaux Hemingway, Chris Sarandon, and Anne Bancroft. Mariel Hemingway also has a supporting role as Margaux’s onscreen sister. The film follows a fashion model who is raped by her sister’s music teacher. Upon his acquittal in court, he rapes her sister, leading her to enact a brutal revenge.

The soundtrack of the film was by French singer Michel Polnareff who released the album in 1976 on Atlantic Records. The soundtrack became a disco success on its own in the United States and internationally.