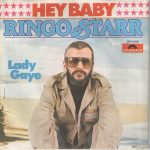 “Hey! Baby” is a song written by Margaret Cobb and Bruce Channel, and recorded by Channel in 1961, first released on LeCam Records, a local Fort Worth, Texas label. After it hit, it was released on Smash Records for national distribution. He co-produced the song with Major Bill Smith (owner of LeCam) and released it on Mercury Records’ Smash label. The song reached number one on the Billboard Hot 100 for three weeks, starting the week ending March 10, 1962.

Ringo Starr released the song as a single, backed with “Lady Gaye”, from his Ringo’s Rotogravure album, on 22 November 1976 in the US (reaching number 74 US Pop), and on 26 November in the UK. He had also sampled it in his previous chart hit, “A Dose of Rock ‘n’ Roll”

Ringo’s Rotogravure is the fifth studio album by Ringo Starr, released in 1976. It was Starr’s last album to feature active involvement from all four former Beatles before John Lennon’s death in 1980. Following the end of his contract with EMI, Starr signed on with Polydor Records worldwide (Atlantic Records handling US distribution). Tracks 1  […]