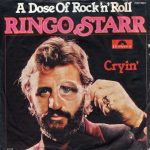 “A Dose of Rock ‘n’ Roll” is a song written by Carl Groszman, who at the time was signed to Ringo Starr‘s record label, Ring O’ Records. Starr released his own recording of the song on his 1976 album Ringo’s Rotogravure. Also issued as the album’s lead single, it became his first hit as an Atlantic Records artist.

Released on 20 September 1976 in advance of the album in the US, the single spent nine weeks on the Billboard charts, peaking at number 26 on the Billboard Hot 100. It was released in the UK on 15 October but failed to chart there

Ringo’s Rotogravure is the fifth studio album by Ringo Starr, released in 1976. It was Starr’s last album to feature active involvement from all four former Beatles before John Lennon’s death in 1980. Following the end of his contract with EMI, Starr signed on with Polydor Records worldwide (Atlantic Records handling US distribution). Tracks 1  […]