1976 John Valenti – Anything You Want 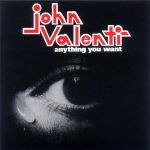 Anything You Want is an album by John Valenti, released in 1976.

He began his career as John Li Vigni with a cover of Stevie Winwood’s “Gimme Some Lovin,” released on Raintree Records in 1971. He then became lead singer and writer for the pop band Puzzle. Puzzle released two albums on Motown Records in 1973 (Puzzle I) and 1974 (Puzzle II). They were one of the rare white groups on Motown, with a sound often reminiscent of the early Chicago Transit Authority. They were a horn pop soul band with John’s vocals recalling Stevie Wonder. They owed a lot to Chicago, their inspiration. Though they never made the Hot 100 singles or Top 200 albums, they made two very credible albums.

John eventually went solo. He released one album in 1976, entitled Anything You Want, on Ariola Records. It peaked at #51 on the U.S. Black Albums chart on the strength of its title track, which had been released as a single and which peaked at #37 on the Billboard Hot 100.  John released a less successful second album, I Won’t Change, in 1981.