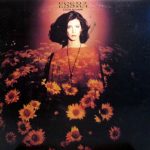 Essra is the fourth album by Essra Mohawk, released in 1976.

Essra Mohawk (born Sandra Elayne Hurvitz on April 23, 1948) is an American singer-songwriter who has recorded a dozen albums, many receiving critical acclaim.

Her best known songs include “Sufferin’ Til Suffrage” and “Interjections!” (both from Schoolhouse Rock!), “Change of Heart”, recorded by Cyndi Lauper and “Stronger Than the Wind”, recorded by Tina Turner.