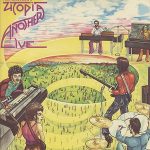 Another Live is a live album by the pop rock band Utopia. It was recorded in August 1975 and released in 1975 on Bearsville.

The record was the band’s first fully live album, the first Utopia album to include future mainstays Powell and Wilcox, and the last to feature founding members Schuckett and Klingman. The trio of backing singers was also new to the group, replacing the previous duo of Anthony Hinton and future solo star Luther Vandross, who had toured the UK with Utopia earlier that year.

Side one contains three new songs that had not been previously issued, and which were either never recorded or not released as studio versions. (Live 1975 versions of Powell’s “Mister Triscuits” and Rundgren’s “The Wheel” can also be heard on the album Todd Rundgren’s Utopia Live at Hamnersmith Odeon ’75). (Shout Music, 2012).

Side two is a mix of live cover versions of songs by band members and other artists. Jeff Lynne’s “Do Ya” was a B-side to The Move’s “California Man” single (1971) which had a double-track B-side also featuring the song “Ella James”.

As well as referring to the fact the album was recorded live, the title is an obvious paraphrase of the phrase “Another Life,” referencing the Eastern philosophical concept of reincarnation, as alluded to in the first track on Side One. The printed title of Powell’s instrumental “Mister Triscuits” was reportedly the result of Powell’s publisher mistranscribing its original full title, “The Emerald Tablet of Hermes Trismegistus”.

With no singles released to push it higher, the album peaked at #66 on the Billboard 200 charts.