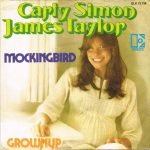 “Mockingbird” is a 1963 song written and recorded by Inez and Charlie Foxx, based on the lullaby “Hush Little Baby”.

American singer-songwriters Carly Simon and James Taylor recorded a remake of “Mockingbird” in the autumn of 1973, and the track was released as the lead single from Simon’s fourth studio album Hotcakes in 1974. It was Taylor’s idea to remake “Mockingbird”, which he knew from a live performance by Inez and Charlie Foxx at the Apollo Theater in 1965, and which song Taylor and his sister Kate Taylor had often sung for fun as teenagers. The song features a considerable lyrical adjustment by Taylor and keyboard work from Dr. John, Robbie Robertson’s rhythm guitar and a tenor saxophone solo by Michael Brecker.

“Mockingbird” rose to number 5 on the Billboard Pop singles chart and number 10 on the Billboard Adult Contemporary chart, and was certified Gold by the RIAA, signifying sales of one million copies in the US. The Simon/Taylor version of “Mockingbird” also charted in Canada (#3), New Zealand (#6), South Africa (#13), the UK (#34) and Australia.

Simon overcame her fear of live performing to come onstage to sing “Mockingbird” with Taylor during his 1975 tour; the duo also performed “Mockingbird” live at the No Nukes Concert at Madison Square Garden in September 1979, the performance being recorded for the No Nukes: The Muse Concerts for a Non-Nuclear Future album and also the movie No Nukes. In recent years Taylor has performed “Mockingbird” live with his daughter (by Simon) Sally Taylor and Simon has performed the song live with her and Taylor’s son Ben Taylor. On November 25, 2015, Simon sang a live duet of “Mockingbird” with Stephen Colbert on “The Late Show with Stephen Colbert”. 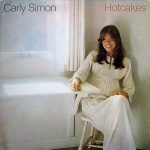