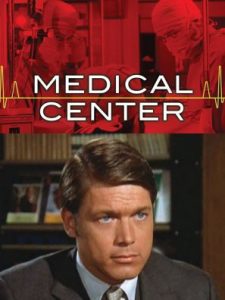 Medical Center (also known as Calling Dr. Gannon) is an American medical drama series which aired on CBS from 1969 to 1976. It was produced by MGM Television.

The show starred James Daly as Dr. Paul Lochner and Chad Everett as Dr. Joe Gannon, surgeons working in an otherwise unnamed university hospital in Los Angeles. The show focused both on the lives of the doctors as well as the patients showcased each week. At the core of the series was the tension between youth and experience, as seen between Drs. Lochner and Gannon. Besides his work as a surgeon, Gannon, because of his age, also worked as the head of the Student Health Department at the University. Helping the doctors was the very efficient Nurse Eve Wilcox, played by Audrey Totter. She started out as a bit role but was eventually upgraded to co‑star status starting in 1972. Wilcox became a regular after two other similar nurses (Nurse Chambers, played by actress Jayne Meadows; and Nurse Murphy played by actress Jane Dulo) had basically served the same functions as Wilcox.