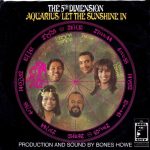 “Medley: Aquarius/Let the Sunshine In (The Flesh Failures)” (commonly called “Aquarius/Let the Sunshine In”, “The Age of Aquarius” or “Let the Sunshine In”) is a medley of two songs written for the 1967 musical Hair by James Rado and Gerome Ragni (lyrics), and Galt MacDermot (music), released as a single by American R&B group The 5th Dimension. The song spent six weeks at number one on the US Billboard Hot 100 pop singles chart in the spring of 1969 and was eventually certified platinum in the US by the RIAA. Instrumental backing was written by Bill Holman and provided by session musicians commonly known as the Wrecking Crew. The actual recording is something of a “rarity”; the song was recorded in two cities, Los Angeles and Las Vegas, then mixed together in the studio. 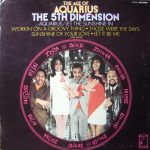