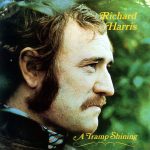 A Tramp Shining is the debut album of Richard Harris, released in 1968 by Dunhill Records. The album was written, arranged, and produced by singer-songwriter Jimmy Webb. Although Harris sang several numbers on the soundtrack album to the film musical Camelot the previous year, A Tramp Shining was Harris’ first solo album. “MacArthur Park” was one of the biggest singles of that year, reaching #2 on the Billboard Hot 100 chart in the United States. The album as a whole was also highly successful, and was nominated for a Grammy Award for “Album of the Year” in 1969