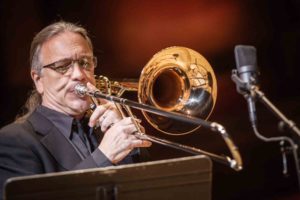 William Frank Reichenbach Jr. (born November 30, 1949) is an American jazz trombonist and composer. He is the son of Bill Reichenbach, who was the drummer for Charlie Byrd from 1962 to 1973. He is best known as a session musician for television, films, cartoons, and commercials. He recorded a solo album, Special Edition, where he is featured on tenor as well as bass trombone.

Reichenbach began playing in high school for bands in the Washington, D.C. area. He also sat in with his father’s group, where he played with Milt Jackson, Zoot Sims, and others. Reichenbach went on to study at the Eastman School of Music and after graduating joined the Buddy Rich band. He would also work in the Toshiko Akiyoshi – Lew Tabackin Big Band in Los Angeles in the mid/late 1970s. After that move he became known for music for television and film.

He played trombone on The Wiz and, with the Seawind Horns including Jerry Hey on Michael Jackson’s albums Off the Wall, Thriller, and HIStory. He also acted as a composer for Cartoon All-Stars to the Rescue.

Bill Reichenbach is a Greenhoe Trombones Performing Artist, performing on a GC5-2R-TIS Bass Trombone with Tuning-in-Slide