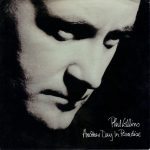 “Another Day in Paradise” is a song recorded by English drummer and singer-songwriter Phil Collins. Produced by Collins along with Hugh Padgham, it was released as the first single from his number-one album …But Seriously (1989). As with his song for Genesis, “Man on the Corner”, the track has as its subject the problem of homelessness; as such, the song was a substantial departure from the dance-pop music of his previous album, No Jacket Required (1985).

Collins sings the song from a third-person perspective, as he observes a man crossing the street to ignore a homeless woman, and he implores listeners not to turn a blind eye to homelessness because, by drawing a religious allusion, “it’s just another day for you and me in paradise”. Collins also appeals directly to God by singing: “Oh Lord, is there nothing more anybody can do? Oh Lord, there must be something you can say.”

The song was Collins’ seventh and final Billboard Hot 100 No. 1 single, the last No. 1 single of the 1980s and the first No. 1 single of the 1990s. It was also a worldwide success, eventually becoming one of the most successful songs of his solo career. It won Collins and Padgham the Grammy Award for Record of the Year at the 1991 awards ceremony, while it was also nominated for Song of the Year, Best Pop Vocal Performance, Male and Best Music Video, Short Form. “Another Day in Paradise” also won an award for British Single at the 1990 Brit Awards. Despite the awards gained following its release, the song also generated some controversy over its subject matter and has received a largely negative reaction from music critics.

Collins and David Crosby’s live performance of the song at the 1991 Grammy Awards was released on the 1994 album Grammy’s Greatest Moments Volume I. In 2009, Collins’s version was listed at 86th on Billboard’s Greatest Songs of All Time. “Another Day in Paradise” has since been covered by several artists, including Brandy, her brother Ray J, Jam Tronik, Axxis, Novecento, and Hank Marvin.

…But Seriously is the fourth solo studio album by English drummer and singer-songwriter Phil Collins, released on 6 November 1989 in the US by Atlantic Records and on 20 November 1989 in the UK by Virgin Records. After Genesis took a break in activity in 1987 Collins resumed his solo career, first starring in the […]