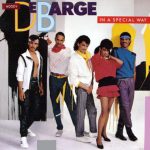 In a Special Way is the third studio album by American R&B group DeBarge, released by Gordy Records on September 24, 1983. It was recorded at Kendun Records in Burbank and Westlake Audio in West Hollywood; written and produced by lead vocalist El DeBarge with additional writing by Mark, James and Bunny DeBarge.

In a Special Way was certified gold in the United States after the release of the singles “Time Will Reveal” and “Love Me in a Special Way”, which hit number one on the Billboard R&B and adult contemporary singles chart. The album is most memorable for not only its singles but album tracks such as “Stay with Me” and “A Dream” – largely due to subsequent sampling in modern hip-hop and R&B tracks. The album has been regarded by some critics as a “classic” in the family group’s catalog.

6 Queen Of My Heart