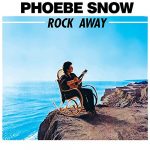 Rock Away is the sixth album by Phoebe Snow, released in 1981.

Phoebe Snow (born Phoebe Ann Laub; July 17, 1950 – April 26, 2011) was an American singer, songwriter, and guitarist, best known for her hit 1975 songs “Poetry Man” and Harpo’s Blues. She was described by The New York Times as a “contralto grounded in a bluesy growl and capable of sweeping over four octaves.”

7 Down In The Basement