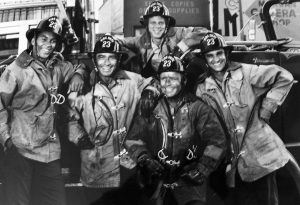 Firehouse is an American drama/adventure series that aired on ABC in early 1974. Somewhat derivative of Emergency! (a hit on rival network NBC at the time) and the recent best-selling book Report From Engine Co. 82 by FDNY fireman Dennis Smith, the series was set in Los Angeles at a small inner-city fire station. The five-man crew of Engine Company 23 was led by Captain Spike Ryerson, played by James Drury, fresh from his starring role of nine years on the western series The Virginian.