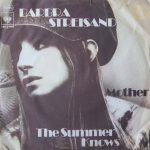 “Mother” is a song by English musician John Lennon, first released on his 1970 album John Lennon/Plastic Ono Band. An edited version of the song was issued as a single in the United States on Apple Records, on 28 December 1970.

Barbra Streisand recorded “Mother” (as well as Lennon’s “Love”) on her 1971 album Barbra Joan Streisand; it was also released as a single.

Barbra Joan Streisand is an album by Barbra Streisand, released in August, 1971 on Columbia Records. It includes “I Mean to Shine”, the first recording of a song written by the Steely Dan duo of Donald Fagen and Walter Becker. The album also features production and backing work by members of the female band Fanny. […]