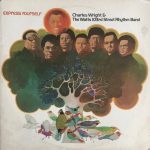 Express Yourself is an album by Charles Wright & the Watts 103rd Street Rhythm Band, released in 1970.