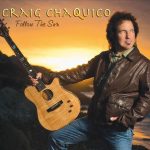 Follow the Sun is the ninth album by Craig Chaquico, released in 2009 on Stanachie.

Craig Chaquico or Chaquiço (born September 26, 1954) is an American guitarist, songwriter, composer, and record producer, of Portuguese descent. He is a founding member of the rock bands Jefferson Starship and Starship and the only member of both bands to play on every song, album, tour, and video. Since 1993, Chaquico has pursued a solo career as a contemporary acoustic jazz guitarist and composer.

6 Lights Out In San Francisco