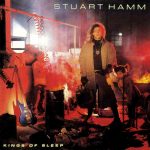 Kings Of Sleep is the second solo album released by bassist Stuart Hamm. It was released on June 19, 1989 on Relativity Records.

The title of the album and many of the songs were inspired by the novels and short stories of William Gibson, including Neuromancer (“Black Ice” and “Terminal Beach” are both references from that novel), Count Zero (referring to the name of the novel as well as the hacker handle of one of the protagonists), and the short story The Winter Market (Kings of Sleep is the name of a fictional stim-album in that story).

3 Call Of The Wild