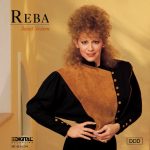 Sweet Sixteen is the sixteenth studio album by American country singer Reba McEntire, released on May 1, 1989 by MCA Records. Four singles from the album entered the Billboard country charts: the number one hits “Cathy’s Clown” (a cover version of The Everly Brothers’ song) and “Walk On”, and the top ten hits “‘Til Love Comes Again” and “Little Girl”.

The album’s title derives from its being McEntire’s sixteenth album, counting compilation and Christmas albums.