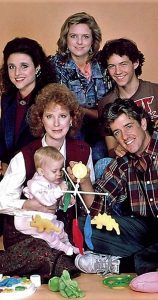 Day by Day is an American sitcom which aired on NBC from February 29, 1988 to June 25, 1989. It stars Douglas Sheehan, Linda Kelsey, Christopher Daniel Barnes, Julia Louis-Dreyfus, Courtney Thorne-Smith, and Thora Birch in her television debut role.

The show centers on Brian and Kate Harper, a married couple with two successful careers (Brian as a stockbroker, Kate as a lawyer) and a teenage son named Ross. After the couple had a second child, their daughter, Emily, they decided to quit their jobs because they had missed all the best times of Ross growing up and decided not to make the same mistake with Emily.

With that thought in mind, they decided to open a daycare center in their home. The episodes mixed stories about the daycare center with those about Ross and his friends. At first, Ross wasn’t too enthusiastic about the idea of his father and mother being at home all the time, because he loved his independence and girl-chasing. He was more than a bit put out with all the bonding his dad wanted to do now.