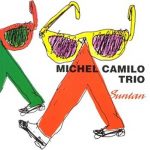 Suntan/In Trio is a studio album by Michel Camilo, released in 1986.

The album was recorded in June 1986. It was released by Electric Bird. The Penguin Guide to Jazz commented on the fuzziness of some aspects of the recording quality and wrote that the “Latin component is also more prominent (than on Camilo’s earlier albums)”.