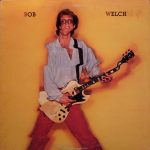 Bob Welch is the fifth solo album from the ex-Fleetwood Mac guitarist of the same name. It was his first for RCA Records. The album has since been reissued on CD by BMG Japan (in 2001) and in 2012 by Wounded Bird Records.

When asked in an interview to promote his Bob Welch Looks at Bop album, Welch was asked if there were any songs he disliked recording, and Welch described one from this album.

“The easy part is a song that I didn’t really want to record, but did anyway, and tried to do my best on it, and then the writer ‘kicked me in the teeth’ because I had changed a couple of things in the lyrics to make the song more singable for me. The song was “Bend Me Shape Me”, on my 1st RCA album, which was a political nightmare to record from start to finish. I was trying to please everybody, and wound up pleasing nobody!”

“It’s What Ya Don’t Say” became a minor hit peaking on the Mainstream Rock charts at number 45.