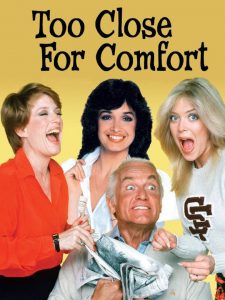 Too Close for Comfort is an American sitcom that aired on ABC from November 11, 1980, to May 5, 1983, and in first-run syndication from April 7, 1984, to February 7, 1987. Its name was changed to The Ted Knight Show when the show was retooled for what would turn out to be its final season.

Ted Knight and Nancy Dussault star as Henry and Muriel Rush, respectively; owners of a two-family house in San Francisco, California. Henry is a conservative cartoonist who authors a comic strip called Cosmic Cow. During scenes in which Henry draws in his bedroom, Knight used his earlier acquired ventriloquism talents for comical conversations with a hand-puppet version of “Cosmic Cow.” Muriel is a laid back freelance photographer, having been a lead singer of a band in her earlier days. They have two grown children, older daughter, brunette Jackie (Deborah Van Valkenburgh) who works for a bank and younger daughter Sara (Lydia Cornell), a blonde bombshell and a college student at San Francisco State University.