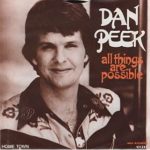 “All Things Are Possible” is the debut single by former America member Dan Peek, from the album of the same name, All Things Are Possible. Released in 1979 it was a No. 1 hit on contemporary Christian music stations (staying at the top of the charts for 13 weeks), as well as reaching the mainstream Pop and Adult Contemporary charts, making it one of the first, if not the first CCM crossover hit. The song was written by Peek and Chris Christian, who also produced the single. Since its release, it has been included on several various artists, CCM compilations

All Things Are Possible is the 1979 debut solo album of contemporary Christian music by Dan Peek, released after his departure from the popular soft rock band America. It was released by Pat Boone’s label Lamb & Lion Records. Chris Christian co-wrote, produced, and contributed acoustic guitar and backing vocals on the album. Peek had […]