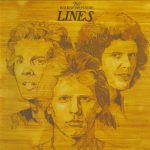 Lines is the fifth studio album by the American pop group The Walker Brothers. The album was released in 1976 and was the second since reforming in 1975. The album failed to chart and includes the singles “Lines” and “We’re All Alone”, neither of which met with much success.

The album was stylistically similar to their 1975 comeback No Regrets, matching the general musical styles of Country and Pop music and marrying them to romantic orchestral arrangements. Aside from “First Day” which is actually the work of John Maus, writing under the pseudonym A. Dayam, the album is compiled of non-original compositions. Scott Walker however would not contribute new songs until the group’s following album Nite Flights in 1978.