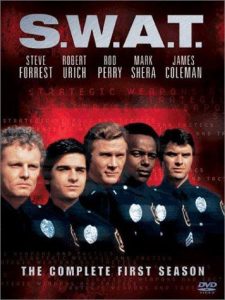 S.W.A.T. is an American action/crime drama television series about the adventures of a Special Weapons And Tactics (S.W.A.T.) team operating in an unidentified California city. A spin-off of The Rookies, the series aired on ABC from February 1975 to April 1976. Aaron Spelling and Leonard Goldberg were executive producers. It was created by Robert Hamner and developed by Rick Husky.