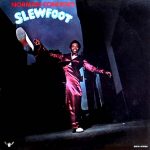 Slew Foot is the fourth album by Norman Connors, released in 1975 on Buddah.

Norman Connors (born March 1, 1947) is an American jazz drummer, composer, arranger, and producer who has led some influential jazz and R&B groups. He also achieved several big R&B hits of the day, especially with love ballads. He is possibly best known for the 1976 hit, “You Are My Starship” on which lead vocals were sung by Michael Henderson.

1 Mother Of The Future

2 Back On The Street