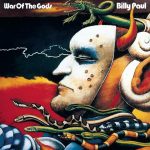 War of the Gods is an album by soul singer Billy Paul. The album was produced by Kenny Gamble and Leon Huff and arranged by Bobby Martin and Lenny Pakula. Released in 1973, the album reached #12 on the Billboard soul chart and #110 on the pop chart. The single “Thanks for Saving My Life” was a top 40 hit reaching #37 on the pop chart and was a top-ten soul record reaching #9. In 2012, Big Break Records remastered and reissued the album on CD with bonus tracks and new liner notes.