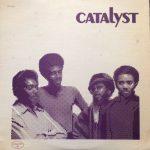 Catalyst is an album by the band Catalyst, released in 1972 on Muse.

Catalyst was a funk/jazz quartet from Philadelphia, Pennsylvania, whose material presaged the work of later jazz fusion artists. The group encountered regional success in the 1970s and have become more widely known since the re-release of their material on CD.

The group was discovered by producer Skip Drinkwater, who signed them to Muse Records after hearing them play at a club in West Philadelphia. Drinkwater and Dennis Wilen produced their debut self-titled LP, released in 1972 with the following personnel: Eddie Green (keyboards, vocals), Sherman Ferguson (percussion), Odean Pope (saxophone, flute, oboe), Alphonso Johnson (bass). The group received little label support for major tours and so spent most of their playing time in the Philadelphia and New York areas. The group recorded and released a second album in 1972 on Cobblestone Records, entitled Perception; by this time, bassist Johnson had left the group to join Weather Report, and was replaced by Tyrone Brown. Drinkwater and Wilen also produced this album.

1 Ain’t It The Truth

Michael Osborn rhythm guitar on \”My Time After While\” only