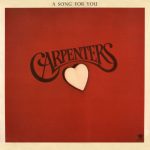 A Song for You is the fourth studio album by American music duo the Carpenters, released on June 22, 1972. According to Richard Carpenter, “A Song for You was intended to be a concept album (of sorts) with the title tune opening and closing the set and the bookended selections comprising the ‘song’. A Song for You was written by songwriter Leon Russell. ”

Six songs were released as A-side singles internationally: “Hurting Each Other”, “It’s Going to Take Some Time”, “Goodbye to Love”, “Top of the World”, “I Won’t Last a Day Without You”, and “Bless the Beasts and Children”.