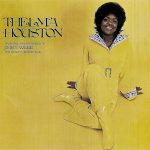 Sunshower is the debut album of Thelma Houston released in 1969 on Dunhill Records. It was produced by Jimmy Webb and charted at number 50 on the Billboard R&B charts.

Prior to signing at Dunhill Records, Houston had recorded three singles, in 1967 at Capitol Records, as lead vocalist of the group called The Art Reynolds Singers. None of these singles made any mark on the singles charts. This album produced four singles: “Everybody Gets To Go To The Moon”, “Sunshower”, “If This Was The Last Song” and “Jumpin’ Jack Flash”. Houston recorded several other tracks while signed to Dunhill. These were issued on an expanded CD re-issue of Sunshower in 2010 by the Soulmusic.com label.