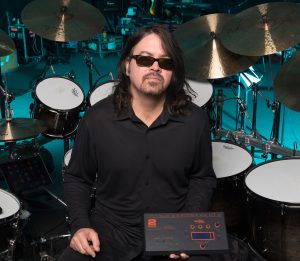 Shannon Forrest (born August 22, 1973 in Easley, South Carolina) is an American drummer and percussionist known primarily for his session work. As a session drummer, he has contributed to the work of many well-known artists, and he is also a producer and engineer.

Forrest began his career working in his fathers studio, recording with many projects with traditional Gospel artists. He moved on to work as a Nashville session musician, where Forrest has been involved in the recording of successful albums by Brooks & Dunn, Taylor Swift, Rascal Flatts, Carrie Underwood, Mary Chapin Carpenter, The Chieftains, Willie Nelson, Ricky Skaggs, Trisha Yearwood, Lee Ann Womack, Jerry Douglas, Merle Haggard, and many others.

Shannon Forrest has been a member of Toto since 2015, taking the place of Keith Carlock. Forrest performed with Toto in 2009 when they were inducted into the Musicians Hall of Fame and Museum in Nashville and he cites Jeff Porcaro and Lenny Castro as his biggest influences. From 2010 to 2012, Forrest supported Boz Scaggs, Michael McDonald, and Donald Fagen on their Dukes of September tours.