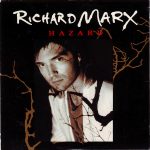 “Hazard” is a 1992 hit song written and performed by American singer/songwriter/producer Richard Marx. It peaked at number 9 on the Billboard Hot 100 and reached number 6 in the Cash Box charts. In addition, the song was Marx’s third number one on the Billboard Adult Contemporary chart. Internationally, it reached number one in Australia and number three in the United Kingdom while becoming a top-ten hit in several other countries, including New Zealand, Norway and Sweden.

Rush Street is the third studio album by singer and songwriter Richard Marx. Released in late 1991, it sold over two million copies in the United States alone. Its first single, “Keep Coming Back,” was #1 on the American Adult Contemporary chart for four consecutive weeks. It reached #5 in Cashbox while peaking at #12 […]