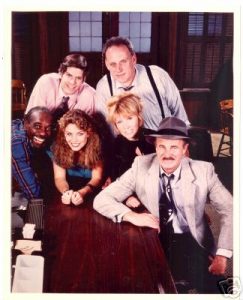 The Slap Maxwell Story (sometimes seen in print as The “Slap” Maxwell Story) is a sitcom broadcast in the United States by ABC as part of its 1987–88 lineup.

It starred Dabney Coleman as “Slap” Maxwell, an egocentric sportswriter for a newspaper called The Ledger, somewhere in the American Southwest. The Ledger is an old-fashioned newspaper, and Slap is an old-fashioned man, who composes his “Slap Shots” column on a typewriter. Despite the newly litigious environment of journalism, Slap insists on filling his column with rumor and innuendo, which draws lawsuits and frequently results in Slap’s termination. After each termination, Slap makes groveling apologies and is rehired.

Slap has an on-again, off-again relationship with Judy (Megan Gallagher), one of the paper’s secretaries. The series also featured Annie (Susan Anspach) as Slap’s ex-wife, who retains a soft spot for him.

Each episode featured a recurring joke in which someone would hit Slap.

The show was created by Jay Tarses, who in 1983 was co-creator of Buffalo Bill, an NBC sitcom in which Coleman starred as an off-putting talk show host.