1987 TV Series – The Days and Nights of Molly Dodd 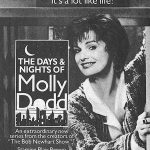 The Days and Nights of Molly Dodd is an American comedy-drama television series that aired on NBC from 1987 to 1988 and on Lifetime from 1988 to 1991. It was created by Jay Tarses and stars Blair Brown in the title role.