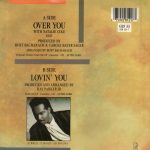 “Over You” is a song by Ray Parker Jr and Nathalie Cole, released in 1987. The single was taken from Ray Parkes Jr’s album After Dark. It peaked at #65 in the UK Charts.