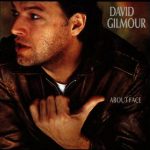 About Face is the second solo studio album by Pink Floyd vocalist and guitarist David Gilmour. Released in March 1984,it was co-produced by himself and Bob Ezrin. Two tracks, “All Lovers Are Deranged” and the more radio-friendly “Love on the Air”, were co-written by Gilmour and his long-time friend Pete Townshend, the main songwriter for The Who (Gilmour composed the music and Townshend wrote the lyrics). The remainder of the songs are credited solely to Gilmour himself. In May of the same year, fellow Floyd counterpart Roger Waters released his first official solo album The Pros and Cons of Hitch Hiking. About Face reached number 21 in the UK and number 32 in the US and was certified gold by the RIAA.

The album was recorded in France with engineer Andrew Jackson at a time when Pink Floyd’s future was uncertain. It was mixed by James Guthrie at Mayfair Studios in London.

Doing this album I wanted to make a really good record. I didn’t want to do it very very quickly, and I wanted to get the best musicians in the world that I could get hold of to play with me, so I thought I’d just make a little list of all my favourite musicians, you know, best drummer, best bass player, best keyboard player, and I’ll work through the list to see who I can get. Jeff Porcaro was top of my drummers list, Pino Palladino was top of my bass players list, and Ian Kewley, or the Rev, as he’s known, he actually came and did the bulk of the hammond and piano playing, and he was terrific. Steve Winwood was top of my keyboard playing list but he couldn’t do most of the album, but I got him to do a bit. He played hammond organ on “Blue Light.” I had a bit more time and was feeling a bit freer about things on this album… just more “accidents” tend to occur.