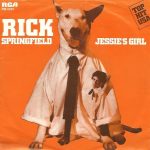 “Jessie’s Girl” is a song written and performed by Australian singer Rick Springfield. It was released on the album Working Class Dog. The song is about unrequited love and centers on a young man in love with his best friend’s girlfriend.

Upon its release in the United States in 1981, “Jessie’s Girl” was slow to break out. It debuted on Billboard’s Hot 100 chart on 28 March but took 19 weeks to hit No. 1 reaching that position on 1 August, one of the slowest climbs to No. 1 at that time. It remained in that position for two weeks and would be Springfield’s only first-place hit. The song was at No. 1 when MTV launched on 1 August 1981. Ultimately spending 32 weeks on the chart, Billboard ranked it as No. 5 for all of 1981.

The song also peaked at No. 1 in Springfield’s native Australia and later won Springfield a Grammy Award for Best Male Rock Vocal Performance. 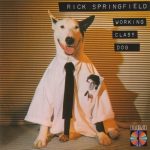