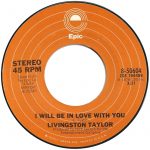 “I Will Be In Love With You” is the second single by Livingston Taylor, taken from  his album 3 Way Mirror. It reached #30 in the US Billboard Charts.

Three Way Mirror is singer-songwriter Livingston Taylor’s fourth album, released in 1978. Its ten tracks produced the song that was perhaps Taylor’s biggest hit, “I Will Be In Love With You”, as well as “Going Round One More Time”, later covered by Taylor’s brother James on his album That’s Why I’m Here. Taylor promoted the […]