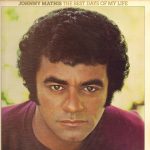 The Best Days of My Life is an album by American pop singer Johnny Mathis that was released on January 29, 1979, by Columbia Records and scaled back considerably on his more than decade-long practice of recording recent hit songs by other artists. He did, however, cover two standards: “As Time Goes By” and “Begin the Beguine”, the latter of which is given a disco arrangement.

The album made its first appearance on Billboard magazine’s Top LP’s & Tapes chart in the issue dated February 24, 1979, and remained there for seven weeks, peaking at number 122. It also made it to number 38 during a five-week run on the UK album chart

1 Would You Like To Spend The Night With Me

2 As Time Goes By