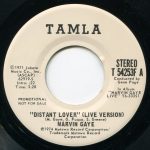 “Distant Lover” is the sixth song issued on singer Marvin Gaye‘s 1973 album, Let’s Get It On and the b-side of the second single from that album, “Come Get to This.” A live recording was issued as a single in 1974. The live version of the song was Gaye’s most successful single during the three-year gap between Let’s Get It On and his following 1976 album, I Want You.

When Let’s Get It On was issued, the song was released as the b-side to Marvin’s hit, “Come Get to This”. The song was later immortalized in a live version issued on his Marvin Gaye Live! album from 1974 in which Marvin builds up the song from a slowed-up version of his Trouble Man instrumental, “Theme from Trouble Man”. After a small introduction, Marvin begins to sing the song, leading female audience members who attended his live show at the Oakland Coliseum to scream in delight. The song would become a show-stopper in later concerts from then on until Marvin’s final concert tour in 1983. Allmusic called it a “steamy version… complete with wailing female fans.” The live version of the song was so popular Motown issued that version as a single in June where it peaked at #28 on the pop singles chart and #12 on the R&B singles chart in September 19

Marvin Gaye Live! is the second live album issued by soul musician Marvin Gaye, released on June 19, 1974 by Tamla Records. In 1973, Gaye released his greatest-selling album, Let’s Get It On, which made him the biggest-selling Motown artist during his lifetime. Motown Records, Gaye’s label for over a decade, had long wanted Gaye […]