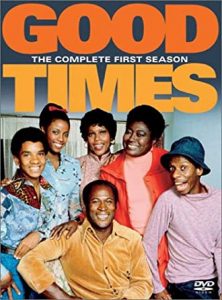 Good Times is an American sitcom that aired for six seasons on CBS from February 8, 1974, to August 1, 1979. Created by Eric Monte and Mike Evans, and developed by Norman Lear, the series’ primary executive producer, it was television’s first African American two-parent family sitcom. Good Times is a spin-off of Maude, which was itself a spin-off of All in the Family.

The gospel-styled theme song was composed by Dave Grusin with lyrics written by Alan and Marilyn Bergman. It was sung by Jim Gilstrap and Motown singer Blinky Williams with a gospel choir providing background vocals.

The lyrics to the theme song are notorious for being hard to discern, notably the line “Hangin’ in a chow line”/”Hangin’ in and jivin'” (depending on the source used). Dave Chappelle used this part of the lyrics as a quiz in his “I Know Black People” skit on Chappelle’s Show in which the former was claimed as the answer. The insert for the Season One DVD box set has the lyric as “Hangin’ in a chow line”. However, the Bergmans confirmed that the lyric is actually “Hangin’ in and jivin’.” Slightly different lyrics were used for the closing credits, with the song beginning on a verse instead of the chorus.