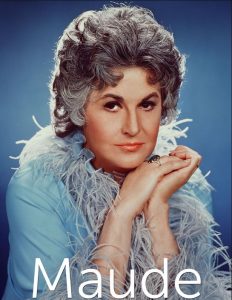 Maude is an American sitcom that was originally broadcast on the CBS network from September 12, 1972, until April 22, 1978.

The show was billed as the first spin-off of All in the Family, on which Beatrice Arthur had made two appearances in the character of Maude, Edith Bunker’s cousin. Like All in the Family, Maude was a sitcom with topical storylines created by producers Norman Lear and Bud Yorkin.

Unusual for a U.S. sitcom, several episodes (such as “Maude’s Night Out” and “The Convention”) featured only the characters of Maude and her husband Walter, in what amounted to half-hour “two-hander” teleplays.

The show’s theme song, “And Then There’s Maude”, was written by Marilyn and Alan Bergman and Dave Grusin, and performed by Donny Hathaway.