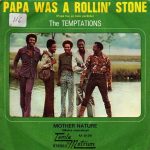 “Papa Was a Rollin’ Stone” is a song performed by Motown recording act the Undisputed Truth. It was written by Norman Whitfield and Barrett Strong in 1971, and released as a single in May 1972. It peaked at number 63 on the Pop Charts and number 24 on the R&B Charts. The song was included on the Undisputed Truth’s album Law of the Land (1973).

Later that year, Whitfield, who also produced the song, took “Papa Was a Rollin’ Stone” and remade it as a 12-minute record for The Temptations, which was a number-one hit on the Billboard Hot 100 and won three Grammy Awards in 1973. While the original Undisputed Truth version of the song has been largely forgotten, the Temptations’ version of the song has been an enduring and influential soul classic. It was ranked number 169 on Rolling Stone’s list of the 500 Greatest Songs of All Time, one of the group’s three songs on the list. In retrospect, the Temptations’ Otis Williams considers “Papa” to be the last real classic the group recorded (it would be the Temptations’ last number one hit and would win them their second and final Grammy Award in a competitive category).

Beginning with an extended instrumental introduction (3:53 in length), each of the song’s three verses is separated by extended musical passages, in which Whitfield brings various instrumental textures in and out of the mix. A solo plucked bass guitar part, backed by hi-hat cymbals drumming, establishes the musical theme, a simple three-note figure; the bass is gradually joined by other instruments, including a blues guitar, wah-wah guitar, Wurlitzer electric piano, handclaps, strings and solo trumpet; all are tied together by the ever-present bass guitar line and repeating hi-hat rhythm. Unusually the song uses only the chord of B-flat minor. The solo trumpet part in the introduction was played by Funk Brothers member Maurice Davis; guitar parts were played by fellow member Melvin “Wah Wah Watson” Ragin and a young Paul Warren. The Temptations’ version of “Papa Was a Rollin’ Stone” followed in the extended-length “cinematic soul” tradition of the work of Isaac Hayes

All Directions is a 1972 album by The Temptations for the Gordy (Motown) label, produced by Norman Whitfield. The LP features the #1 hit “Papa Was a Rollin’ Stone”, a twelve-minute cover of a Whitfield-produced Undisputed Truth single. “Papa” won three Grammy Awards in 1973: Best R&B Performance by a Group for the Temptations, Best […]